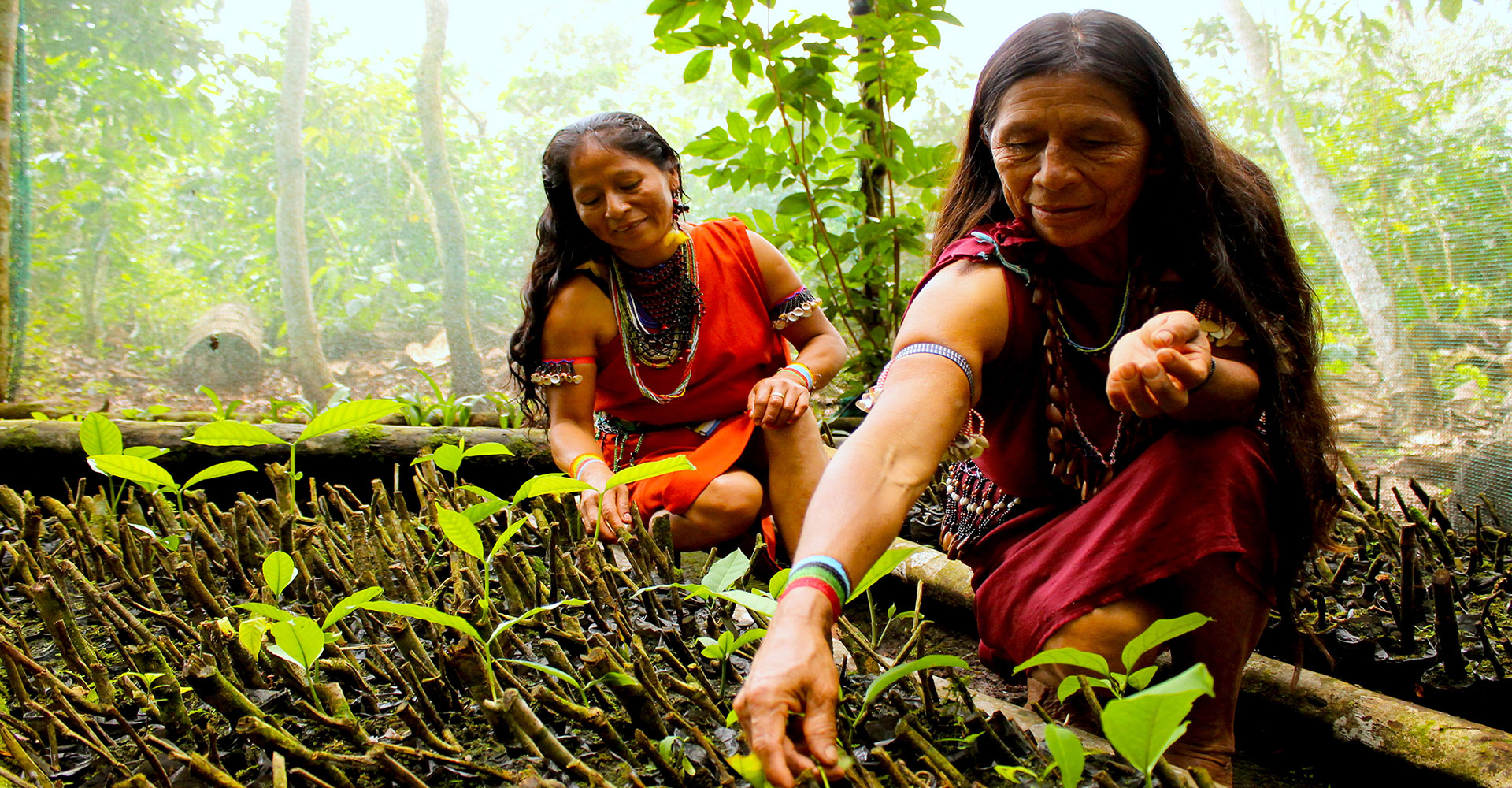 It is no secret that deforestation and the exploitation of the Amazon has left many lives and cultures devastated. Many watch in despair as companies mutilate the land and extinguish indigenous peoples’ homes for that one nefarious capitalist gain-profit. Profit over sustainability, profit over safety, profit over respect and profit over morals.

This has been particularly true for the region of San Martin of Peru. Fifty years ago, the highway “Carretera Marginal de la Selva” was built that connects the coastline to the jungle and now San Martin has become the most deforested area of Peru with 20% of the deforestation happening in this region. By the year 2000, almost half of the San Martin region had been converted into fields, farms or wastelands and the figure is undoubtedly now much higher. 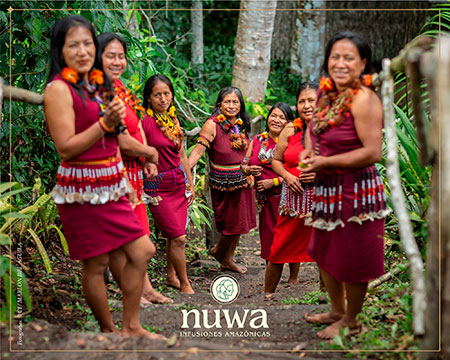 Not only does this mean that ancient forest is lost, causing a fatal drop in biodiversity and damaging the ecological systems. It means the native people of these areas lose their homes and the land that their ancestors lived on. For many the land is sacred, but from a more secular point of view this destruction means the loss of potential medicines and the opportunity to understand biology and nature at a time when we need it most. Once gone this land cannot be returned, as it takes thousands of years to build these complex ecosystems. The severance of these lands has ecological impacts world-wide.

The Shampuyacu community is located in the Alto Mayo valley in this region, and around 300 Awajún families live there. The Awajún people are the indigenous people of the Peruvian jungle who have been settled there for over 300 years. They hold animist spiritual beliefs and have allegedly always had the reputation of being brave warriors as they resisted incorporation into Incan and Spanish societies. The Awajún watched their community, culture and customs decline with the destruction of their land. Fascinatingly it seems that the nature of an area and culture are intrinsically linked - biophilia is a popular term used to describe these phenomena.

They started cutting down our trees. Since then we left our customs behind. Our tools, the wood, our medicinal plants, the palm trees, timber plants, edible fruits. They were all gone.

The Awajún women, determined to preserve their land and ancestral knowledge, went to the general assembly of the Shampuyacu community in 2012 and asked for an area of land which they could grow medicinal plants. This is a fairly rare proposition as women's land tenure (their ownership and access to and control of land) remains limited, and globally less than 15% own land. It can even be as low as 5% in the Middle East and North Africa. This would mean both a path to economic stability and the protection of their beloved land.

This proposition was well received, and the women were given 9 hectares of land to grow medicinal plants which they call the "Nuwas Forest". The Awajún people are also working in collaboration with Conservation International to further regenerate 90 hectares of land. They do this through supporting sustainable agroforestry systems and biotrade, as well as more recently, in promoting eco-tourism in the community and the Nuwas Forest. Overall these initiatives have helped 220 families and 1000 people.

Additionally, the women receive support from the Takiwasi Center - a fascinating center which is a hub for scientists, shamans, psychiatrists and healers. Here addiction therapy and clinical studies are conducted for medicines such as Ayahuasca and other plant species. They publish scientific data based on ancient shamanistic healing methods and it is truly an interdisciplinary space for people to come and heal. Thanks to the accompaniment and training received from Takiwasi’s Natural Products Laboratory, so far the Shampuyacu community has been able to identify and register with Peru’s National Institute for the Defense of Free Competition and the Protection of Intellectual Property (INDECOPI) 227 recipes on the use of medicinal and aromatic plant species, as INDECOPI also acts for the legislative protection against biopiracy.

The protection of this land means the women are able to preserve their cultural knowledge about medicinal plants and pass it down to future generations. Over 66 women have benefited from this, and as they can sell their crop they now have much more economic stability. "It is because of Conservation International that we now conserve the forest, rescue the varieties of yucca, cultivate the cacao, recover our medicinal plants, we learned how to recover our ancestral crops and how to recover our forest", says Margarita Cumbia Sawau, an Awajún woman.

When asked about losing their heritage and knowledge of medicinal plants an Awajún mother replied "I won't let this happen with my daughter. She should know more and apply it in her life". Takiwasi and the Awajún women have also collaborated to make two teas to be sold to the general public to return profit into their land and communities, and valorise their ancestral knowledge.

What we wanted to take was clear. We would not be the first to search the Amazon for medicinal plants and knowledge to take away. The point was: what are we going to bring in return? What would we leave behind? What would we bring to the Amazon?" 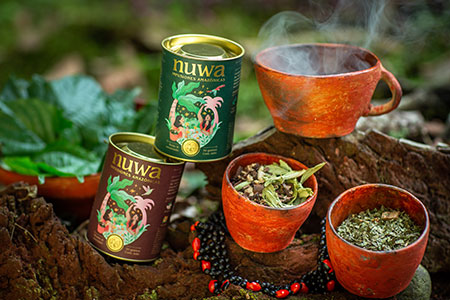 The main ingredients have been chosen for their medicinal properties and for being traditionally used by the women of Shampuyacu community. These are clavo huasca (treats general discomfort) and ginger (treats flu symptoms). Other ingredients like vanilla and cocoa husk have been added to improve flavour, along with stevia, aguaymanto and native cinnamon. The teas are available for the Peruvian market since December 2020. It is clear that the determination of the Awajún community, and collaboration from Conservation International and Takiwasi has given new life to a region of Peru and a culture on the brink of extinction.

The West has an infinite amount to learn from indigenous people, and this is becoming more evident with top scientists and revered institutions like Kew Gardens and governments internationally putting efforts towards this. In a time where nature and humanity are at crisis point, it seems wise to listen to people who have lived harmoniously with land for millennia. Instead of trying to dominate, subdue and exploit nature, indigenous people have created techniques for living with and utilising nature in ways that cause no harm but rather are regenerative. It is time to sit and listen to the indigenous communities that can guide us to an understanding of nature that we will never get through academia. Therefore, it was a delight to hear a young Awajún girl’s response when she was asked who she was going to pass on this knowledge too, earnestly reply: "Everybody that comes to my house, and I am going to give them cake".

About the Author: Rebecca Lazarou has a degree in Biomedical Sciences - Human Biology and a MSc in Medicinal Natural Products and Phytochemistry at University College London UCL, United Kingdom. She is a medicinal plant researcher at Kew Gardens, editor for the academic Journal of Herbal Medicine, science teacher at herbalism schools, writer and educator. Her research interests include: plant and fungi medicines, pharmacognosy, quality control of plants, cannabis, psychedelics, ethnopharmacology, neuroscience, holistic therapies, ethnobotany, entheogens, healing and wellbeing.

The nuwas Forest is a successful example of the process of recovery of biodiversity and ancestral knowledge.