- Where did your interest in medicinal plants come from and how did you get to Peru?

I arrived in Peru in 1980 to work with Doctors Without Borders in a multisectoral health project in the Peruvian Altiplano. I spent 33 months there managing a small 15-bed hospital in the Province of Lampa. Having very limited resources, I sometimes had to appeal to local health specialists: midwives, bonesetters, caregivers, traditional healers... I was surprised by the results obtained by them in cases that I was able to verify at a medical level. They were effective but the explanations that these traditional practitioners gave me about how they had obtained their knowledge did not coincide with my western background: according to them it came from dreams, from having been struck by a lightning, from spirits that spoke to them, etc.

The local midwife, an illiterate who only spoke Quechua, knew in advance the sex of the child, the eventual complications of childbirth, the date of birth, etc. I was able to verify the truthfulness of all this. To find an answer about this hiatus between the “non-human” origin of their knowledge and the evidences of congruence with reality, I decided to explore this topic further. The classic explanations of a cultural type, of suggestion, of deception, did not answer the question of their operative efficacy in both physical cases (bone fractures, for example) and psychological cases (psychosis, for example).

- How was Takiwasi born and built?

That led me to develop (1986) a research project on these traditional medicines that I finally developed in the Upper Peruvian Amazon, the border between the Andean world and the jungle world. Very quickly, the meeting with many healers led to the same conclusions as in Lampa: the teaching came essentially from the non-visible world. The only way to know if everything was true was to follow in the footsteps of the healers and take the plants according to their indications and care, since they pointed out that anyone could learn if they had the will, it was not a cultural issue. I did not want to limit myself to external observations and speeches, I am not an anthropologist but a doctor.

So I started taking the plants and, among others, the famous Ayahuasca. The veil was torn and I discovered that what the masters said with their metaphorical language was accurate and of an unsuspected depth for a Westerner, with enormous potential for healing at all levels. Through the plants, with strict rules, one could access the invisible world and be guided and taught. It was during these modified states of consciousness that I was told that I had to work with people suffering from addiction, that that was my path. I had never thought about it before. They even showed me where to establish a center and, little by little, how to carry out this project. Thus was born, after 6 years of self-experimentation, the Takiwasi Center (1992).

- What relationship do the Amazonian peoples of Peru have with Ayahuasca? Is it part of the daily life of most of the population or is it something reserved for initiates?

Among the Amazonian peoples there is a great variety of use of Ayahuasca, but in general it is not commonly used except by healers. Everybody else come to it only out of necessity, for personal healing or to solve a personal or community problem, and for a limited time. Most of the population has never taken Ayahuasca and is afraid of it. In traditional healing, often the patient does not take Ayahuasca but only the master healer does it, in order to “see” the patient's problem, heal him, give him instructions. The use of Ayahuasca is also associated with its “misuse”, that is, the practice of witchcraft extremely widespread throughout the Amazon. So it generates great fear and the battles between “shamans” are the daily bread. Certain ethnic groups do not use Ayahuasca and its use has spread largely with the arrival of the Spanish and recently with the visit of foreign tourists (neo-shamanism or shamanic tourism).

- Knowing both ways of life (Western and Amazonian) and having studied the plants of power and the culture of the area, what main differences do you find with respect to magical thinking there and here?

The Amazonian peoples (like all ancestral peoples) are quite pragmatic and what anthropologists describe as “magical-religious thinking” is in good part a projection of Western thought. The desecrated Western world, where “God is dead”, finds itself without a spiritual compass. The indigenous peoples know the invisible world while the Westerners deny it or imagine it, they have cut themselves off from it, they ignore it, and rationalism actually hides a strong imaginary of compensation, often unconscious, about the “indigenous”. They are fantasized as “good savages” ideally living in harmony with nature, pure and wise, which is a total illusion, or as superstitious, irrational ignorant, lacking in discernment, which is just as inaccurate. The extraordinary crisis of covid-19 shows to what extent Westerners can “swallow” delusions and fantasies beyond all rationality, pragmatism, and even outside all scientific criteria (which is the definition of superstition).

- What role does (geographic) space play within the transcendental experience? Is it easier to connect near the jungle than in a city?

Natural environments not invaded by the “energies” of the modern world with its invasive technology (noise, strong odors, chemical and electro-magnetic pollution, etc.) are spaces with the best context to carry out experiences of modification of consciousness. But it must be taken into account also the “energy” that the master healer carries in his own body and establishes in a session through the ritual, the songs, the plants he has taken, his links with entities of the invisible world the he calls for (ancestors, teachers, spirits of plants, angels, saints and the same divinity). Therefore, even in a city context, good quality work can be done, even if it is not ideal. In fact, in the jungle, nature spirits are present even before they are called. The energy is less dense, more transparent. This is known to all mystics of all traditions.

- How does “magic tourism” change the relationship of communities with their rites and traditions? (if it changes it at all)

The arrival of many foreigners in the last 20-30 years represents an enormous challenge for the preservation of the healing tradition. The introduction of economic interests upsets all the traditional dynamics. So-called healers who are not recognized by their communities and do not care for local patients are popping up everywhere. Elderly healers are not replaced by young healers. There are strong cultural misunderstandings between visiting Westerners and local indigenous or mestizos. These misunderstanding are sometimes funny but many other times can lead to dramatic situations. For example, the relational codes between men and women are extremely different and this misunderstanding causes numerous situations of sexual abuse during the experiences of foreign women with local healers. 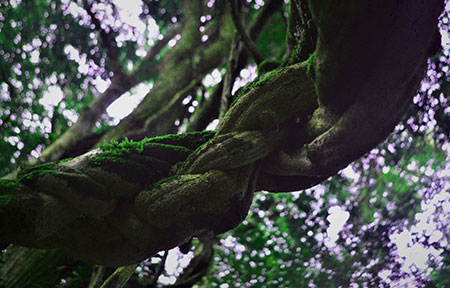 The long process of apprenticeship that is required to be a good healer (about 10 years) does not match the urgency of Westerners who want everything fast. The three classic "lusts" (to use a classic religious term) have been exacerbated: power, sex, money... The economic benefits in general are exclusive to some people, but do not affect the entire community. This creates envy, division, jealousy. The basic concept of reciprocity that structures the indigenous world has been shattered. The only advantage of this trend could be the valuation of those resources and ancestral indigenous wisdom, the preservation of certain medicinal plants that now have an economic value, the development of scientific research on this knowledge (although poorly paid and often with economic interests involved as with the patents of laboratories that leave out the origin of their discoveries).

- Is magical thinking something shared by the majority of the community or not? Is it impervious to westernization or is it fading?

As I pointed out above, this is not a “magical” thinking but a medicine that integrates the dimension of the invisible created world. It is an integral part of the daily life of the indigenous people, although it tends to be diluted among the mestizos and in urban life. However, it remains in the collective unconscious as in the Western world, although in a much more repressed way in the latter. The reality of the invisible world is found in all the great traditions of humanity: in the Western world we can find it for example in the Hebraic-Greek-Christian tradition.

The Western repression of the spiritual and religious sources since the coming of rationalism (followed by positivism, existentialism, etc.) largely explains, in my opinion, the visible manifestations of that “spiritual shadow” through multiple diabolical or satanic expressions of modernity. As the same repression with the seduction of modernity (money, technological ease, fascination for the “screens”, etc.) is installed among these ancestral peoples, the proximity with the invisible world tends to disappear, the “spirits move away”. Amazonian traditions are inclusive and easily absorb what seems appropriate, useful and practical, for both good and bad.