Alberto Dubbini, professor of Natural Sciences and expert in religions, has chosen to center his book around the experiences of three doctors out of the ordinary. Over the pages, these unique stories let us glimpse very significant points in common that enlighten the reader on the traditional therapeutic practices of the peoples of Central Africa and the Peruvian Amazon.

Piero Coppo is an Italian ethnopsychiatrist who lived among the Dogons of Mali and took a keen interest in their vision of disease and their system of care. Initiated by a Dogon healer, Coppo was able to draw from this experience a broadening of the too narrow point of view of psychiatry and therefore an obvious professional enrichment.

The key concept of this interview is that of "active (tangible and intangible) object". By this expression Coppo finally designates a form of fetishism very widespread among the Dogons and insists on the exclusively cultural nature of souls and spirits linked to these objects. These entities would not have, according to him, reality "in itself" and their miraculous powers would derive from the symbolic meanings granted to them by the community. The socio-cultural context, that is to say the set of myths, rites, beliefs and the cosmovision characterizing the life of a community, provide these "objects" with their symbolic effectiveness as expressed by C.L. Strauss.

Coppo, however, goes further in the process of cultural relativization by cataloging in the category of "intangible active objects" even concepts from the sciences. He notably cites the Jungian notion of archetype. By the way, he seems not to realize the universality of archetypes. Indeed, it is sometimes good to remember that C.G. Jung has always taken care not to influence the spontaneous and overflowing imagination of his patients and to clarify that an archetype is not a symbolic image, but the unconscious structure and dynamics which characterize and underlie it. People analyzed are most often unaware of the very existence of this notion, but their dreams, their fantasies and delusions clearly show the permanence of such a structure which is found identical in the myths and legends of the most distant civilizations.

The examples of Dogon diseases and treatments are very interesting from a psychoanimistic point of view. "Soul theft" as the root cause of illness is central to this. The soul, the vital energy and its singular qualities, is for the first peoples considered the most precious and determining good for their psycho-physical and social health. The Dogons, like most animist peoples, have a developed, holistic conception of health, which takes into account all the dimensions that are integrated into the individual. A broad conception, therefore, which is reminiscent of the modern definition given by the WHO: a "state of psychophysical and social well-being". 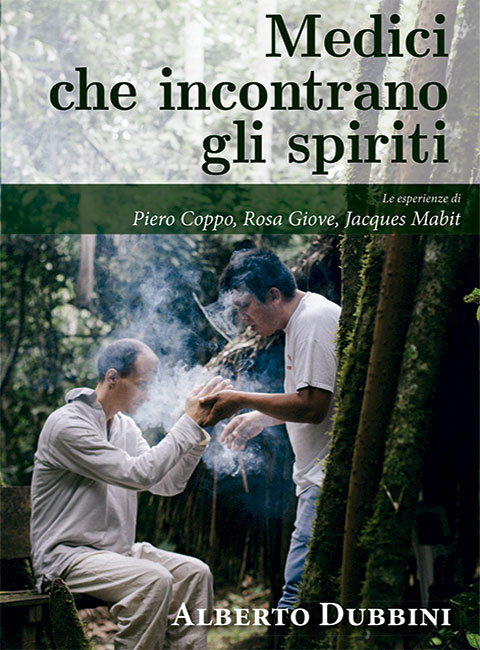 The second part is dedicated to the experience of Rosa Giove, a Peruvian doctor whose professional activity has put her in contact with many patients who, coming from poor backgrounds, often prefer to rely on the less expensive traditional medicine, still very much alive and well steeped in animist and “vegetalista” roots typical of the Amazon. Dubbini focuses here particularly on the remarks made by Giove on Ayahuasca, this medicinal and sacred plant used for a very long time by many peoples of the Amazon and whose tradition has surrounded contexts of ingestion and ritual practices extensively tested. Giove warns against the perils deriving from a "process of expropriation on the part of a consumerist society" of a practice untied from its initiatory foundations. She recalls her first experience with Ayahuasca when, equipped with her medical instruments, she wanted to observe her own reactions and interpret them in the light of a scientific and objectifying approach. Her attention was focused entirely on the quantifiable data: blood pressure, heartbeat, respiratory rate… But nothing really dazzling seemed to be happening inside her. Just a seemingly innocuous dream of which she only had a vague memory. A dream which however later turned out to be a true vision offered by the plant and which ended up curing her of a phobia of dogs deriving from an infantile trauma of which her consciousness had no trace. From examples like this one, we finally understand that the "intention" of the plant is superimposable on the purpose of the unconscious as a functional system3: to allow the subject to overcome his blockages, to face his monsters. and to overcome his resistance by remaining on a level which, while symbolic, is no less effective. In fact, dreams frequently place the subject in a critical situation but capable of making him face his neuroses. In such a highly symbolic and emotional context, change becomes possible. This explains why there are dreams which are already, in themselves and without interpretation, therapeutic. It is not uncommon for a patient to wake up from such a dream feeling as though they have been healed without even realizing what happened to them. This is also what once happened in the incubation dreams experienced by the faithful in the temple of Aesculapius in Epidaurus.

That the unconscious is here identified with a plant is not surprising in itself because, as the psychoanimistic approach has repeatedly emphasized, Psyche and Nature have always been intimately linked. This is one of the essential points that in my opinion emerges from this testimony, which is also rich in interesting clinical examples.

The third and final part of the book is devoted to synthesizing, as far as possible, the very particular human and professional experience of Jacques Mabit who worked as a doctor in the same Peruvian region as Rosa Giove and who was initiated by several local healers. Arrived in Peru, Mabit had noticed that many young indigenous people captured by the abusive consumption of drugs went to consult healers which were adapting their practices to the new pathology thanks to the help of detoxifying and psychoactive plants, such as Ayahuasca. He was able to note many times that the altered state of consciousness induced by this plant, far from being negative, can on the contrary prove to be very effective from a therapeutic point of view. It is underlined here, once again, how much Amazonian shamanism owes to the ritualized use of medicinal plants, both in its therapeutic dimension as well as in its religious dimension and in relation to Nature (for example to promote hunting or fishing).

Indigenous people traditionally live in constant interconnection with Nature and the invisible world that expresses itself there. This connection is so fundamental that we could even hypothesize that it is its lack that produces this dangerous infatuation with the Internet among modern people. In other words, the often exaggerated, even pathological, dependence on social networks could be explained by the unconscious overcompensation of a loss of animate connection with beings. For it is this constructive relationship with the hereafter that provides authentic tribal members with ancestral wisdom to harmoniously and effectively orient and adapt to the world. It is clear that the first peoples of the Amazon are culturally well equipped to remedy psychological difficulties and provide for an individuation that cannot be abstracted from Nature.

Considerations that are very interesting and which may even seem surprising concern the bridges that Mabit builds between animism and Christianity. The Church's aversion to all forms of pagan practices and thoughts is notorious. However, the parallels proposed by the French doctor, for example between the animist spirits and the angels and demons of the Bible, and between the shamans and the exorcist priests are, it seems to me, quite relevant. It would probably have been futile and even unfair for a doctor who had immersed himself in Catholic culture from his childhood to make a clean slate of his spiritual baggage and to attempt a simple conversion. This is, alas, an attempt that is often observed in many uncritical "adventurers" who have a passion for exoticism.

By the way, it seems that angelology has come back into fashion lately, especially in some New Age circles. There is a need to rediscover certain traditions of the past which can offer a real experience of numinous as an essential complement to faith. This numinous experience is probably what makes the difference. This is what allows Mabit to speak of a reality of spirits, unlike Coppo and Jung who even went so far as to speak of “reality of the soul” in connection with the unconscious and "objective psyche" as to archetypes.

In conclusion, a particularly stimulating book which allows an understanding of these many aspects of ancestral cultures and practices that can enrich and complete the modern vision of malaise and psychotherapy.

1 Dubbini, A. (2021). Medici che incontrano gli spiriti, l’esperienza di Piero Coppo, Rosa Giove, Jacques Mabit. [Doctors that meet the spirits, the experience of Piero Coppo, Rosa Giove, Jacques Mabit]. Youcanprint ed., 222 p. This note has been translated from the original in French.
2 Psychoanalyst, psycho-animist, Vice-President of the Association of European Psychoanalysts - APE (http://ape-psychanalyse.com/) and President of the Association Natura & Psiche (http://naturaepsiche.jimdo.com/).
3 C.G. Jung talks about the specific functions of the unconscious, including complementarity, compensation and finality.